WINNER discloses WINNER’s version of “MISSING YOU”, 2NE1’s ballad song, in cable channel Mnet’s reality show “WINNER TV” that will be broadcasted in the evening on the 24.

WINNER’s “MISSING YOU” starts with SONG MINHO’s rap and is an acoustic song in which the tones of KANG SEUNGYOON, NAM TAEHYUN, and KIM JINWOO create a harmony.

Plus, WINNER’s “1st WINNER WINTER SPORTS COMPETITION” held on a snow field will be also disclosed in the episode, too.

WINNER members compete with one another to gain the gold medal in the sports competition of three events including a race on a snowy field, hit-or-miss snow sledge race, and snow wrestling.

Meanwhile, WINNER is to make their official debut by the end of February this year.

Missing You is a winter ballad song of 2NE1 that ranked number one on the real-time, daily, and weekly charts of nine major music sites in Korea soon after its release last November. 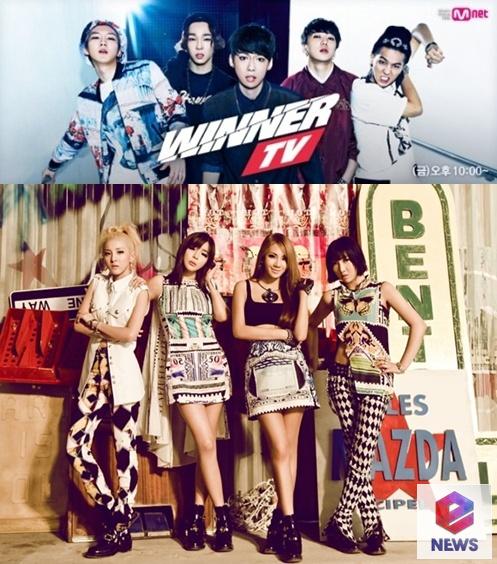 Winner will be re-introducing the hit song with its unique harmony of vocals, starting off with Song Min Ho’s rapping.

Meanwhile, the upcoming episode of Winner TV will also feature the members holding a sports competition, as they compete against each other in running, sled racing and wrestling in the snow.

2013 was a year of evolution for YG Entertainment‘s 2NE1. The year opened with speculations surrounding upcoming releases for the group,  with rumors ranging from a full English language album to collaborations with label mates Big Bang. 2NE1’s CL,Minzy, Dara, and Bom celebrated numerous milestones throughout the year, however the group did not release a full album or extended play. With the release of three major singles, 2NE1 remained in the spotlight not only in Korea but internationally.

2NE1 started off the year quietly, with interviews which sparked many of the rumors of their upcoming releases. On March 14, 2NE1 released the previously recorded single Take The World On, a collaboration featuring will.i.am. The group would later be featured on will.i.am’s April release, #willpower with Gettin’ Dumb. On March 31, 2NE1 helped kick off the opening weekend performance for G-Dragon‘s 1st World Tour at the Olympic Gymnastics Arena.

On May 4th, 2NE1 further established their image as international trend setters by participating in the United All Originals Live performance with Snoop Dogg. The concert was sponsored by Adidas and reflected the ability of 2NE1 to serve as style icons, as well as performers. The performance was Snoop’s first official concert in Korea during his twenty year career and the group delivered an electrifying performance with the American hip hop pioneer.

On June 29th, 2NE1 joined G-Dragon for two performances in Singapore. On July 8th, the group released the reggae influenced Falling In Love which was an uptempo single that was perfect for the summertime. Falling In Love was followed by the release of Do You Love Me which surprised audiences as 2NE1 had just completed promotions for Falling In Love.

2NE1 were named Korean Brand and Entertainment ambassadors for 2013 in October. As a result of this appointment, the group was present in London during the Expo. In conjunction with the November event, there was the YG Hologram Show which featured 2NE1 and PSY. On November 20th, 2NE1 would fully release the highly anticipated single Missing You. Missing Youfeatured a melancholy feel and also a tastefully executed nude scene by CL.

2NE1 performed Missing You as part of their 2013 MAMA stage and CL was with Icona Pop. CL received the Best Dance Performance-Female Solo award at 2013 MAMA for The Baddest Female. 2013 began to come to a close with the release of Park Bom & Lee Hi (BH)’s All I Want For Christmas Is You. The melancholy cover of the Mariah Carey classic was the first release of the new YG Entertainment unit. On December 29, CL will appear with Lee Hyori at SBS Gayo Daejun.

2013 has been an exciting year for 2NE1 and has definitely been a year of growth. In December, it was announced that 2NE1’s long time manager, Jjangmae would be going over to work with YG’s newest group WINNER. This move can undoubtedly be seen as the fact that 2NE1 is set to reach new height and are now seasoned performers in K-Pop. The group has promised another world tour in 2014 and new music, which will be highly anticipated.

Missing You Promotion for Indonesian Blackjacks

EXO’s Miracles in December took the 1st spot for the 1st week of January followed by 2NE1 with Missing You and Donghae and Eunhyuk’s Still You for the 3rd spot.